In this fairy tale with a sexy twist, she’s a penniless San Francisco seamstress. He’s the king of Italian couture.

Who’s got designs on whom?

Ache For You, an all-new steamy standalone in the Slow Burn Series from J.T. Geissinger is available NOW! 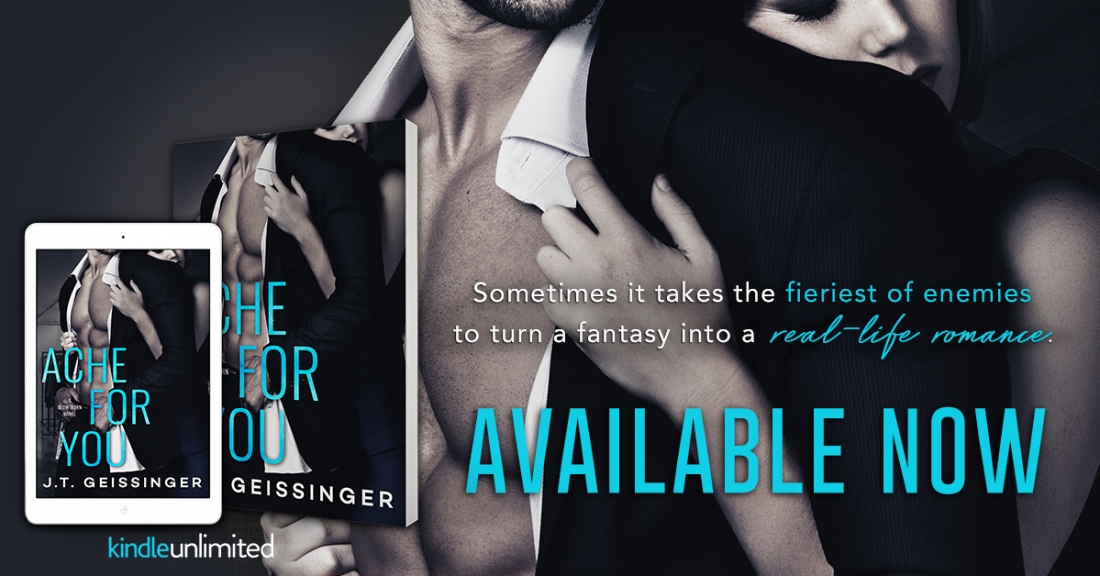 Download your copy today or read FREE in Kindle Unlimited!

I absolutely loved the first two books in this series and had the same expectations for this one. But it didn’t quite hit it out of the park like I hoped it would, but still found it an OK read.

To me, it felt like the style was a bit different than the past two books. And there were lines that I definitely could have done without, it went a little bit too far or maybe I’m sensitive. I wasn’t quite connecting with the characters like I hoped I would and the romance took a while to get to. I did feel for Kimber and everything she endured, so I understand a little bit about the way she was with being left at the altar and losing her father. I can only imagine the emotional roller coaster she was on.

I liked Matteo a little bit here and there, but he had his unlikable moments and I really just wanted him to be truthful about his intentions towards Kimber. I think it would have saved a lot of heartache for everyone.

Trust me, I’m bummed out that I didn’t like this as much as I wanted to, but it could still work out for you!

Start the series of standalones today!

With my chin held high, I go over to him, push him out of the doorway, and slam the door in his face.

The door instantly swings back open.

“You know, hate and love aren’t so different, bella.”

He’s being philosophical now, pursing his pretty mouth and gazing at the ceiling, as if viewing the stars.

I could kill him.

“Why do you enjoy torturing me? Are you some kind of sadist?”

He ignores me, naturally, and continues his little Socratic speech. “They’re two sides of the same coin, really. Passion, obsession, sweaty palms, and a racing heart. Lost sleep.” He slides his gaze over to the cheese and salami on the dresser. “A poor appetite.”

“You want a poor appetite? I’ll give you a poor appetite. I’ll take that salami and wedge it so far down your throat you won’t be able to eat ever again.”

Amused by my fury, he smiles. “Passion,” he reminds me, smug as shit.

I look around for something to throw at him.

“Let’s call a truce.” He strolls forward, hands in his pockets.

As if I’ll feel safer that way.

“No truce. No way. And you’re the one who started this war, remember?”

“Yes, you. Wait, why am I even talking to you? You fake kissed me!”

“Yes! You admitted you did!”

“So we’ll add dementia to your long list of problems.”

By now he’s trapped me at the edge of the bed, advancing so stealthily I hardly noticed it, which was probably his dastardly plan all along.

I stand my ground and flatten my hand in the center of his chest, bracing my arm so he can’t move forward. “I’m not a joke,” I say, my voice raw. “I’m not a plaything.”

“I never said you were.”

He says softly, “You’re giving me grief about how I look at you? You should see your eyes right now.” His voice drops an octave. “So dirty, bella. So very, very dirty.”

“I’m not selling the company, no matter how much you try to sex it out of me.”

He quirks an eyebrow. “Sex it out of you?” As I watch with ragged breath, he sinks his teeth into his full lower lip. “Now that sounds interesting. Let’s discuss.”

“Yes, women have told me that before. Usually right after they come.”

I can’t even with this guy!

Then it’s like he remembers something. He looks around, frowning. “What are you doing in here?”

“What does it look like I’m doing? Trying to get rid of you!”

He looks at the wad of sheets in the corner. He looks at the freshly made bed. Then he looks back at me. The smile that breaks over his face is breathtaking.

“My darling ex-stepsister. Are you moving in?”

Very deliberately, I slide my hand up his chest until I reach his neck. Then I grasp his throat—lightly, but enough to let him know I mean it.

His skin is hot to the touch, and his throat is strong. Thick. It makes me think of other hot, thick body parts.

I officially hate myself.

He lifts his brows, obviously amused. “You have the most interesting internal conversations. Are you going to choke me?”

I growl. It sounds silly, like a kitten trying to be scary.

Matteo leans forward. My arm is still locked at the elbow, so it puts more pressure around his throat. Holding my gaze, he says softly, “Go ahead. I know you want to.”

Boy, do I. I curl my other hand around his neck so now I’ve got him good and surrounded. I feel his pulse, beating hard against my palms. It’s weirdly arousing.

Intently watching my face, he whispers, “Those eyes.”

Book Review | The Dragon’s Bride — a rather delightful monster romance.